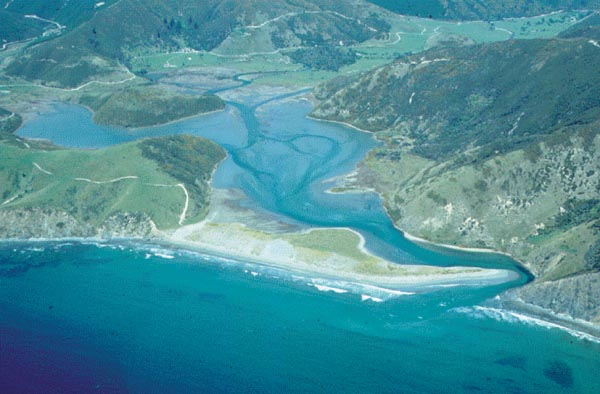 An estuary is a coastal passage of water where tides from the open sea meet river currents, and salty seawater mixes with fresh riverine water to create an environment of high productivity (Correll, 1978; Pritchard, 1967). The intermediate location of estuaries causes it to act as a transitional environment between terrestrial and marine ecosystems. Estuaries can be viewed as a continuum, whereby further upstream, the calmer, fresher water of the river progresses into the tidal, saline water of the ocean. This estuarine continuum – due to the range of its attributes, including salt content, depth, temperature, tidal energy, et cetera – allows for the diversification of the habitats within it. Three key estuarine habitats include salt marshes, mangroves, and seagrass beds. The organisms within these habitats interact with one another in numerous ways, creating not only food chains but food webs of complex interactions and energy exchanges.

Correll (1978) states that estuaries are areas of unusually high productivity because the conditions that create estuaries result in high levels of photosynthate from in situ primary production byphytoplankton and plants. Estuarine food webs are sustained by their habitats; therefore, it is important to analyse the relationship between habitats and food webs and how they contribute to the overall high productivity of estuaries. Furthermore, because estuaries are closely linked with terrestrial and marine ecosystems, estuarine productivity may be attributed to or contribute to adjacent environments.

In order to analyse the high productivity of estuaries, it is crucial first to explain the features of estuarine habitats and the organisms which inhabit them. Links to food webs from the habitats can then be made to understand better how energy and nutrients enters the estuarine system. Three important estuarine habitats exist, including salt marshes, mangroves, and seagrass beds; each possesses unique attributes and organisms living there.

Salt marshes are wetlands dominated by few species of halophytic vegetation and are alternately inundated and drained by the tides (Christiansen, Wiberg, & Milligan, 2000; Gedan, Altieri, & Bertness, 2011; Richardson, Swain, & Wong, 1997). The halophytic plants add stability to the marsh by trapping and binding sediment and can also withstand stressful conditions like the constant flooding and draining of the marsh as well as the salty, waterlogged, and, sometimes, hypoxic soil (Gedan et al., 2011; Pennings, Grant, & Bertness, 2005). Three types of fauna utilise the salt marsh habitat. (1) Specialist species inhabit marshes as their primary home, utilise the high vegetation biomass for energy, and are well adapted against desiccation; these specialist animals tend to be invertebrate species (Kon et al., 2012; Minello & Webb, 1997; Richardson et al., 1997). (2) Another type of fauna uses marshes as an extension of their home and are therefore regular visitors to the marsh. As a general example, a crab species uses the marsh for protection while their home in the mudflat is under heavy predation, then returns home once predation has eased. (3) Terrestrial or ariel species venture into the marsh for certain activities such as gathering food, courtship, or nesting (Burger, 1979; Hanson & Shriver, 2006; Teixeira, Duarte, & Caçador, 2014). Overall, the conditions that define a salt marsh create a habitat dominated by marine invertebrates (Daiber, 1982).

Mangroves are woody plants that can withstand excessive salt concentrations and water inundation, and “true” mangroves are from the genus Rhizophora. Mangroves are distributed globally in tropical and sub-tropical regions (Parida & Jha, 2010; Simard et al., 2019). Mangrove plants contend with adverse conditions like saline water and anoxic substrates, which are difficult, if not impossible, environments for terrestrial plants to live in. Mangroves have combatted this by developing salt glands, roots with low permeability, and adventitious roots with pneumatophores (Liang, Zhou, Dong, Shi, 2008; Medina, 1999; Parida & Jha, 2010; Yáñez-Espinosa, Terrazas, & Angeles, 2008). The foliage, trunks, and roots of mangroves all provide unique niches for organisms to inhabit (Nagelkerken et al., 2008). Above the water, the foliage provides a habitat for terrestrial fauna like birds, mammals, reptiles, and insects. The trunks and pneumatophores provide a rigid substrate for organisms to settle on. Under the water, the roots can support sponges, bivalves, and algae, and provide a labyrinth of microhabitats for aquatic species like fish. Due to the abundance of food and shelter, mangroves may function as a nursery for juvenile fish and invertebrates species (Nagelkerken et al., 2008).

Seagrasses are the only flowering plants that have evolved to survive submersion in saltwater (Orth et al., 2006). The seagrasses, anchored to the sediment by underground runners called rhizomes, congregate to form vast beds that provide a large habitat area for organisms to inhabit. The stability of seagrass habitats means it is a popular environment for transient species to lay eggs and is one of the most productive and diverse marine ecosystems (Constanza et al., 1997; Duarte & Chiscano, 1999). Seagrass habitats provide shelter, food, and a nursery area for fish and marine invertebrates as well as food for waterfowl and marine mammals like dugongs and manatees (Heck, Hays, & Orth, 2003; Holm & Clausen, 2006; Rybick & Landwehr, 2007; Thayer, Bjorndal, Ogden, Williams, & Zieman, 1984; Weisner, Strand, & Sandsten, 1997).

Habitats contain niches that make way for a variety of interactions between organisms. In estuaries, salt marshes, mangroves, and seagrass beds create unique environments that induce complex food webs. These food webs begin with an input to the first trophic group known as the primary producers, a group that includes phytoplankton or plants like the vegetation of salt marshes, algae, and seagrasses. Trophic transfers take place from one group to another as the energy that began with primary production is moved up the food web to other trophic groups like herbivores or carnivores. During trophic transfers, some energy may be transported out of the food web into a cycle (such as the nitrogen cycle) or be expelled as a respiratory end product (Day, Kemp, Yáñez-Arancibia, & Crump, 2012).

Detritus is dead, particulate, organic material, and can be processed repeatedly by organisms at most levels of a food web until it is either buried in sediment or exported (Darnell, 1961); therefore, detritus is an important input to food webs. Salt marsh vegetation, mangrove litter, and seagrasses are likely to provide significant amounts of plant detritus to estuarine ecosystems (Teal, 1962; Odum & de la Cruz, 1963).

Estuaries are a transitional environment between terrestrial and marine ecosystems. Terrestrial species will use estuarine salt marshes for specific activities because the marshes provide an environment unlike any terrestrial habitat. Furthermore, fishes may also enter salt marshes at high tide to feed before returning to the marine environment (Heck et al., 2008). Liang et al. (2008) determined mangroves as a buffer for the terrestrial environment against marine energies such as erosion and damage from waves and typhoons. Seagrasses provide an essential link from estuaries to marine ecosystems because live seagrass leaves not consumed enter the detrital pool (Heck et al., 2008). The detrital seagrass can be transported by currents and waves over extensive distances and be used by organisms for shelter, habitat, or consumed along the way (Ochieng & Erftemeijer, 1999; Thresher, Nichols, Gunn, Bruce, & Furlani, 1992). The detrital seagrasses journey may conclude in deep-sea canyons, where it accumulates and supports organisms in an environment with poor habitat structure and low primary production (Josselyn et al., 1983; Vetter, 1998). Thus, seagrass meadows link estuaries with an unlikely marine environment, the deep sea.  Estuaries also receive significant detritus inputs from both terrestrial and marine ecosystems (Day et al., 2012).

Estuaries are thought to be highly productive per unit area. This high productivity can mean that the plants are very productive, that more organic matter is produced than used, or that estuaries sustain a substantial amount of fauna compared to other environments (Day et al., 2012). Schelske and Odum (1962) considered the different contributors to one estuary’s productivity, and these can be extended to all estuaries in a general sense:

Habitats could potentially be viewed as the most important contributor to estuarine productivity because they give way to the environments which allow estuaries to be productive; the complexities of estuarine food webs would cease to exist if it were not for the availability of diverse habitats in which they can operate. Salt marsh, mangrove, and seagrass bed ecosystems have relationships with terrestrial and marine ecosystems, increasing estuaries’ productivity. The value of these habitats to certain trophic levels depends on their needs for shelter, food, or to carry out species-specific activities, showing that the way these habitats are structured affects trophic transfers in estuarine food webs (Walters, 2000). Some estuarine habitats may increase production in other estuarine habitats and adjacent ecosystems. The diversity of the mangrove ecosystems gives way to a rich microbial community, supported by nutrient cycling, which may promote faster sponge growth than in coral reefs (Kathiresan & Bingham, 2001). Odum and Helad (1972) suggest that the production of mangroves is exported to the marine environment, which provides food for secondary consumers and may lead to higher production in the marine ecosystem. Heck et al. (2008) describes how the highly productive nature of seagrass meadows can spill over into other ecosystems. For example, some fish live in mangroves but feed on seagrass, creating a trophic link between the two habitats. Also, some fish that inhabit coral reefs feed on seagrass, shifting organic matter and nutrients into the reef habitat and food web.

Productivity of any ecosystem is easily measured by the quantity of photosynthate it can produce because primary production essentially supports entire food chains. Estuaries have such a plethora of trophic interactions that it is necessary to extend their food chain to a food web that spans multiple ecosystems. This food web would cease to exist without the dynamic habitats that support them, with the key habitats being salt marshes, seagrass beds, and mangroves. The features that make these habitats unique from any other habitat globally, are also the features that sustain the species that live in them. Because estuaries are a transitional environment between terrestrial and marine ecosystems, it is likely that they benefit from the high productivity of estuaries, and this may be shown through the trophic interactions and nutrient cycling that occurs. Estuaries are a dynamic environment, and further research is needed to understand the global effect of their high productivity to learn how to better protect them.

Nixon, S. W. (1980). Between coastal marshes and coastal waters—a review of twenty years of speculation and research on the role of salt marshes in estuarine productivity and water chemistry. Estuarine and wetland processes, 437–525.

Pritchard, D. W. (1967). What is an estuary: physical viewpoint. American Association for the Advancement of Science.

Rybicki, N. B., & Landwehr, J. M. (2007). Long‐term changes in abundance and diversity of macrophyte and waterfowl populations in an estuary with exotic macrophytes and improving water quality. Limnology and Oceanography, 52(3), 1195–1207.