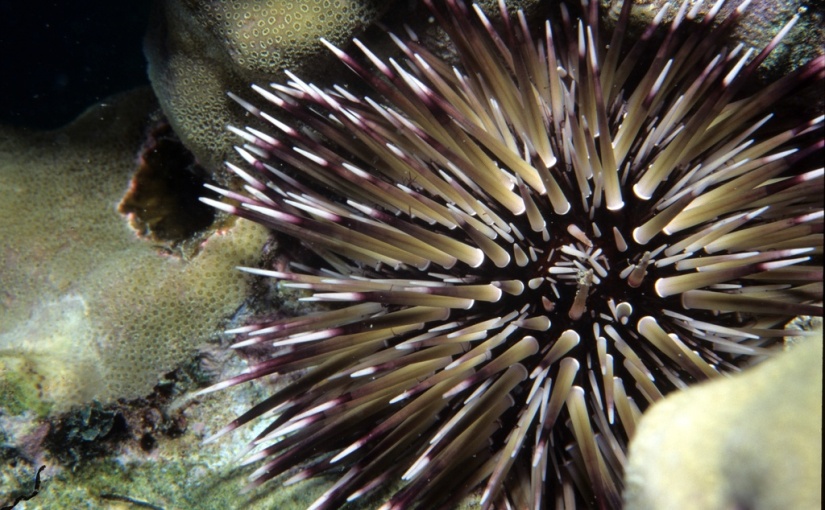 Echinoderms are the largest marine-only phylum, and its ~7,000 species are found at every ocean depth from rock pools to the deep abyss (Dubois, 2014). Sea stars, sea urchins, sand dollars, and sea cucumbers comprise this phylum and let me tell you why they’re so darn cool.

Echinoderms all possess radial symmetry, even though this can be quite hard to see in sea cucumbers, trust me, it’s there. Usually, the oral surface is on the underside of the animal, and the anus is located on top. The calcareous echinoderm endoskeleton is composed of ossicles which can be in the form of plates, spines, or lumps (Evamy & Shearman, 1965). The ossicles form a sponge-like structure called the stereom and are supported by a tough epidermis (Bottjer, Davidson, Peterson, & Cameron, 2006). Each ossicle develops from the deposition of a single cell which divides into more cells that deposit calcium carbonate in the original orientation. Ossicles are connected by collagen and may connect to muscles, allowing for flexibility and manoeuvrability. Spines are modified ossicles used for protection, locomotion, burrowing, gathering food and can also contain venom.

Pedicellariae are small, pincer-like structures used for protection against anything that may settle or graze on an animal’s body (Campbell, 2020; Coppard, Kroh, & Smith, 2012). Some pedicellariae are involved in capturing food, and some may be venomous. Each pedicellaria has its own muscles and sensory receptors, and therefore each pedicellaria is capable of reacting to a stimulus. There are four types of pedicellaria in urchins and two types for sea stars; one animal may have multiple types.

Before we dive into this topic, take a look at this diagram, and feel free to refer to it as we dive into the incredibly unique water-vascular system.

The water vascular system is an elaborate closed system of canals used to help locomote the organism via its tube feet (Blake & Guensburg, 1988; Prusch & Whoriskey, 1976). The madreporite is a small sieve filter that creates an external link to the water-vascular system and is usually located to one side of the aboral surface and connects to a stone canal that extends vertically until it meets the ring canal. Radial canals emerge from the ring canal to the rays of the body in sea stars and around the body in sea urchins. From the radial canal stem lateral canals, which connect to ampullae and tube feet. Ampullae are bulb-like swellings that serve as reservoirs for water and fill the tube foot with water as they contract.

Tube feet have suction cup endings allowing for strong attachment to substrata and provide a general direction of movement. Pressure is exerted on the end of the sucker, and mucous functions as an adhesive. When the tissue inside the sucker contracts, it forms a cup that is secured to the substrate. In the case of sea stars living on soft substrates, tube feet are pointy so they can penetrate sediment and bury themselves.

The feeding strategies differ significantly between species of Echinodermata. Some are filter feeders, most urchins are grazers, and most sea stars are carnivorous predators.

This predatory strategy of sea stars is perhaps the most interesting of the echinoderms (Melarange, Potton, Thorndyke, & Elphick, 1999; Semmens et al., 2013; Wulff, 1995). The oesophagus connects to a stomach with two sections called the cardiac stomach and the pyloric stomach. In evolutionarily advanced sea stars, the cardiac stomach can be everted out of the mouth and engulf and digest food. They can use their tube feet to create suction on bivalve shells and open them, where they will evert a section of their cardiac stomach inside the shell to release enzymes to digest the animal inside. The stomach retracts back inside and the partially digested prey can be passed to the pyloric stomach.

Regular echinoids (e.g., sea urchin) have no front or back end, and the oral end is underneath and the aboral end is on top. From above, they are circular and radially symmetrical because regular echinoids roam the seafloor in search of food and need to move in any direction. This means they are exposed to predators and have evolved elaborate spines for defence and locomotion. Spines vary between species: needle-like, club-like, poisonous, or thorny. Regular echinoids are usually scavengers with a diet of plant matter, animal detritus, and other inverts, and can use their tube feet to grasp food. They have powerful, complex jaws called Aristotle’s Lanterns, which extend through the mouth to collect food and leave a distinctive star-shaped grazing trace.

Irregular echinoids (e.g., sand dollars) lead different lifestyles from the regulars. They burrow in the seafloor and extract nutrients from sediment and have one plane of symmetry – the oral end is at the front of the animal to collect food, and the aboral end is at the rear to leave waste behind. The spines have lost their defensive role and have become reduced and hair-like to help burrow, move through sediment, gather food, and generate currents in the burrow. Many have lost their jaws as they are unnecessary to their mode of life. The tube feet are modified into flanges for respiration and gathering food.

Class Echinoidea, aka echinoids, is composed of sea urchins and sand dollars.

Sea cucumbers have leathery skin and an elongated body that is radially symmetrical along its longitudinal axis. They have no oral or aboral surface but instead, stand on one of their sides. Extraordinarily, they can loosen or tighten the collagen that forms their body wall and can essentially liquefy their body to squeeze through small gaps.

There are around 1,500 species of sea star that make up the class Asteroidea.

Marine Biologist and Geospatial Scientist. Obsessed with sharks; enamoured with the ocean. View all posts by underwateremily